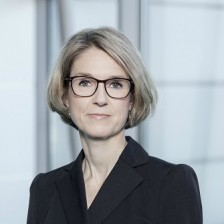 Andrea Bracht heads up the Internal Audit department of Commerzbank AG on Executive level. Until she took over her role in October 2015 she was in charge of overseeing all audit activities related to Commerzbank AG's investment banking business globally. Being a trained bank officer with a degree in business administration Andrea started her career in 1999 at Dresdner Bank in Frankfurt where she worked in Group Audit's Investment banking audit division. In 2007 she became Chief Operating Officer of Group Treasury. Andrea is member of the executive board of the German Institute of Internal Audit and holds a certification as Financial Services Auditor (CFSA) as well as a certification in Risk Management Assurance (CRMA).